3 Reasons Gluten Intolerance May Be More Serious Than Celiac Disease 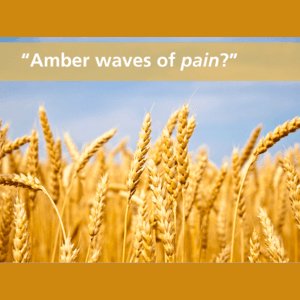 While scientists and dietitians argue the reality of  nonceliac gluten sensitivity (NCGS), Chris Kresser has done his research and found that gluten intolerance is not only real but it may be more serious than celiac disease. Chris Kresser, M.S., L.Ac is a leader in the fields of ancestral health, Paleo nutrition, and functional and integrative medicine. Chris Kresser presents three reasons why NCGS is not only a genuine condition but why is may also be a much more serious problem than celiac disease.

#1: Celiac disease is far easier to diagnose than NCGS

According to some estimates, for every diagnosed case of celiac disease (CD), there are 6.4 undiagnosed cases that remain undiagnosed—the majority of which are atypical or “silent” forms with no damage to the gut. (1) This silent form of CD is far from harmless; it is associated with a nearly fourfold increase in the risk of death. (2)

I believe that patients with NCGS are even more likely than patients with CD to go undiagnosed. Most gastroenterologists today know how to screen for celiac disease. They will typically test for antibodies to antibodies to alpha gliadin, transglutaminase-2, deamidated gliadin, and endomysium, and if positive do a biopsy to determine if tissue damage is present.

However, we now know that people can (and do) react to several other components of wheat above and beyond alpha gliadin, the component that is implicated in CD. These include other epitopes of gliadin (beta, gamma, omega), glutenin, wheat germ agglutinin (WGA), gluteomorphin, and deamidated gliadin. What’s more, people can react to other types of tissue transglutaminase, including type 3—primarily found in the skin—and type 6—primarily found in the brain. (3, 4, 5, 6, 7, 8)

So, imagine a scenario where the patient is reacting to deamidated gliadin, glutenin, gluteomorphin, and either transglutaminase-3 or -6, but not reacting to alpha gliadin or transglutaminase-2—which are the antibodies used to screen for CD by most doctors. They will remain undiagnosed, and may continue to eat gluten for the rest of their lives, putting themselves at serious risk for autoimmune and other diseases.

This is not a hypothetical situation. In fact, I see cases like this all the time in my practice. Here is a screenshot from a recent test I ran on a patient. I use a much more thorough test for wheat and gluten intolerance called Array 3 from Cyrex Laboratories. Unlike other tests, it measures antibodies not only to alpha gliadin and transglutaminase-2, but also many of the other components of the wheat protein I mentioned above, as well as transglutaminase-3 and 6.

This patient is not reacting to alpha gliadin or transglutaminase-2. Had they been tested by their conventional doctor, they would have been told that they do not have celiac disease or gluten intolerance.

However, as you can see, she is reacting quite significantly to several different components of wheat, including:

When this patient consumes wheat or other gluten-containing foods, she may not experience the classic digestive symptoms associated with CD or NCGS, because she is not producing antibodies to transglutaminase-2 (which is mostly expressed in the gut). Instead, her intolerance of wheat could manifest in skin conditions like eczema or psoriasis, and in neurological or brain-related conditions like depression, peripheral neuropathy, or ADHD. (9, 10)

Worst of all, if this patient had not had this test, and had continued to eat wheat and gluten for the rest of her life, it’s likely that she would have been at much higher risk for the long list of serious conditions that are associated with gluten intolerance, such as multiple sclerosis, ataxia, diabetes, and even Amyotrophic Lateral Sclerosis (Lou Gehrig’s disease). (11, 12, 13, 14)

Unfortunately, this patient is not the exception—she is the rule. I’ve seen so many test results just like this, where the patient would have been misdiagnosed as not having gluten intolerance had they gone to a conventional doctor.

This presents another obvious problem, of course: if very few health care providers are doing the correct testing for gluten intolerance (like the panel from Cyrex above), then how can we possibly know what the true prevalence of NCGS is? We can’t—but given everything I’ve written above, we can certainly suspect that it’s much higher than currently believed.

Even with the limitations of current testing, however, some researchers have speculated that NCGS may affect as many as 1 in 10 people. (15) I suspect this is accurate, if not conservative.

There has been a big backlash in both the mainstream media and on social media channels against the idea of gluten intolerance. Despite overwhelming evidence to the contrary, uninformed journalists and armchair Facebook scientists continue to argue that NCGS is some kind of widespread collective delusion—simply a figment of the imagination of anyone who claims to experience it. And for reasons that I do not fully understand, they do so with an almost religious fervor.

The “gluten intolerance haters” seemed to emerge in force after a paper published by Gibson et al. in 2013 made the rounds in the media. This study found that a group of patients with irritable bowel syndrome (IBS) were not sensitive to gluten, but instead were reacting to a group of poorly absorbed carbohydrates called FODMAPs. (16) Aside from the fact that this study did not in any way disprove the existence of NCGS, from a practical perspective the study findings would not have changed the behavior of most people with IBS who identified as being gluten intolerant, since wheat and many other gluten-containing grains are FODMAPs and should thus be avoided by these patients.

More importantly, however, in the last two years since the Gibson paper new studies have been published that directly contradict Gibson’s findings and strongly suggest that patients with IBS do, in fact, react adversely to gluten—and not just FODMAPs.

For example, a new double-blind, randomized trial out of Iran was specifically designed to determine whether a group of IBS patients reacted to gluten specifically, or simply improved for other reasons on a gluten-free diet. (17) Here’s how it worked:

After six weeks of the diet symptoms were controlled in only 26% of the gluten group, compared with 84% of the placebo group. In the gluten-containing group, all symptoms—especially bloating and abdominal pain—increased significantly one week after starting the gluten.

The authors point out that it is important to properly identify gluten intolerance and distinguish it from FODMAP intolerance because some recent research suggests that long-term low FODMAP diets may have adverse effects on the gut microbiome. One study found that a low FODMAP diet compared with a habitual diet reduced the proportion and concentration of Bifidobacteria, one of the most beneficial species of bacteria in the colon. (18) (Authors note: I will be exploring this issue in more detail in a future article.)

But I would add another equally serious consequence of misdiagnosing gluten intolerance as FODMAP intolerance, which is the increase in risk for numerous and sometimes serious diseases that occurs when someone with NCGS continues to consume gluten.

Dr. Della treats all types of conditions, but has a special interest in digestive problems, chronic fatigue, and thyroid dysfunction. As a Naturopathic Doctor, her license allows her to prescribe pharmaceuticals, as well as help patients wean off of them. The model of holistic health looks at the whole body not just isolated symptoms. Contact Dr. Della Parker if you’re seeking a holistic approach for optimal health.