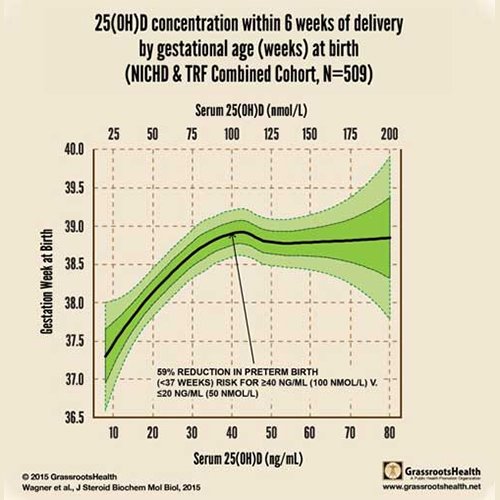 A pregnant American woman is 10 times more at risk of dying from pregnancy-related complication than a woman in Poland or Austria. Why? The health of pregnant women in the U. S. ranks worst among developed countries, according to the 2015 Save the Children report. What does this have to do with Vitamin D? Vitamin D helps the immune system, calcium utilization, mental well-being, and oh so much more. Optimal Vitamin D levels prevent things like cancer, diabetes, auto immune disease, heart disease, and seasonal depression. It’s not one of those vitamins that has super obvious signs of deficiency but is necessary for proper functioning of the entire body. Researchers have determined the Vitamin D level necessary to help reduce preterm births by 50%, read details below.

Vitamin D Is Crucial for Mother and Child

In the U.S., premature births have risen 36 percent over the past 25 years. Each year, more than half a million preemies are now born in the U.S., and it’s the number one killer of newborns.

Research shows that vitamin D optimization could likely prevent half of these premature births. Among African-American and Hispanic populations, as much as 70 to 75 percent of all preterm births might be prevented.

Similar findings have been documented among twin births, which tend to have a higher risk for preterm birth. A 2013 study2 found that women carrying twins who had a minimum vitamin D level of 30 ng/ml (75 nmol/L) in their late second trimester had a 60 percent reduction in preterm births.

Previous research3 has also shown that women with a vitamin D level of 40 ng/ml have a 25 percent reduction in infections, particularly respiratory infections such as colds and flu, as well as fewer infections of the vagina and the gums.

Comorbidities of pregnancy were also reduced by 30 percent in the women who achieved 40 ng/ml, including diabetes, high blood pressure, and pre-eclampsia – a potentially deadly increase in blood pressure and fluid accompanied by low platelets.

A mother’s vitamin D status during pregnancy can also have lifelong ramifications for her child. Vitamin D deficiency in pregnancy has been linked to childhood allergies, asthma,4,5 colds and flu, dental cavities, diabetes, and even strokes and cardiovascular disease in later life of the child.6,7

According to the most recent paper,8 produced by researchers from GrassrootsHealth and the Medical University of South Carolina, women with vitamin D levels of 40 to 60 ng/ml have a 46 percent lower preterm birth rate than the general population.

Women with a vitamin D level at or above 40 ng/ml by their third trimester had a 59 percent lower risk for premature birth than those with levels below 20 ng/ml. Moreover, as noted in a press release:9

“Another key finding was a steady increase of gestation time (how long the baby stayed in the womb) correlating to the rise of vitamin D up to around 40 ng/ml where it reached a plateau.10

The March of Dimes estimates that the annual cost of preterm births in the United States as $12 billion (for 455,918 children).

If approximately 50 percent of preterm births could be prevented in the general population, as this analysis suggests is possible, there could be $6 billion available for other services and, more than 225,000 children and families spared this trauma.” [Emphasis mine]

Dr. Della Parker tests all of her patients for Vitamin D and finds that most of everyone not taking Vitamin D supplements, regardless of sun exposure, is deficient. Contact Dr. Della Parker to start your holistic approach towards a healthier lifestyle and receive a free consultation.