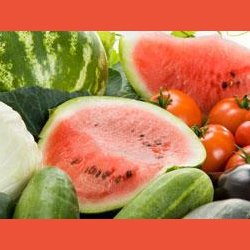 We are what we eat, right? Wrong! We are what we eat, digest, and absorb. Proper digestion and absorption are lacking in so many due to the foods that are common in this culture. I know, every doctor has a different definition of a healthy diet. It gets confusing! Trust me, I know, I have sifted through all the information and now I can preach what I feel is the healthiest diet for most. Read Dr. Mercola’s Top Summer Foods for Health below.

Sprouts may be small, but they are packed with nutrition, including vitamins, minerals, antioxidants, and enzymes that help protect against free radical damage.

They’re an inherently cooling food and are perfect for adding to salads, either in addition to or in lieu of salad greens, and sandwiches and are especially tasty in combination with fresh avocado. You can also add them to your vegetable juice or smoothies.

Better still, growing your own sprouts is quite easy, and you don’t need a whole lot of space either; they can even be grown indoors. Two of my personal favorites are sunflower seed and pea shoots—both of which are typically about 30 times more nutritious than organic vegetables.

They’re also among the highest in protein. In addition, sunflower seeds contain healthy fats, essential fatty acids, and fiber—all of which are important for optimal health.

Mung beans are another common sprout popular to TCM; they’re a good source of protein, fiber, vitamin C, and vitamin A.

I used Ball jars when I first started sprouting seeds about 25 years ago, but I’ve since switched over to growing them in potting soil. With Ball jars you need to rinse them several times a day to prevent mold growth and it is a hassle to have them draining in the sink, taking up space.

Moreover, you need dozens of jars to produce the same amount of sprouts as just one flat tray. I didn’t have the time or patience for that, and you may not either. The choice is yours, though. You can easily grow sprouts and shoots with or without soil.

My Sprout Doctor Starter Kit comes with what I consider to be three of the best sprouts to grow – sunflower shoots, broccoli sprouts, and pea shoots. When grown in soil, you can harvest your sprouts in about a week, and a pound of seeds will probably produce over 10 pounds of sprouts.

Sunflower shoots will give you the most volume for your effort and, in my opinion, have the best taste. In one 10×10” tray, you can harvest between one and two pounds of sunflower sprouts, which will last you about three days.

You can store them in the fridge for about a week. Broccoli sprouts look and taste similar to alfalfa sprouts, which most people like. I’ve partnered with a company in a small town in Vermont that develops, breeds, and grows their own seeds, and are industry leaders in seed safety for sprouts and shoots.

All of my seeds are non-GMO, certified organic, and packed with nutrition. My starter kit makes it easy to grow your own sprouts in the comfort of your home, whenever you want. It provides everything you need, so all you have to do is grow and enjoy your sprouts.

2. Watermelon (and Other Melons)

Watermelon is more than 91 percent water.2 This means that eating watermelon on a hot summer day is a tasty way to help you stay hydrated and avoid dehydration. Watermelon is also an excellent source of lycopene, with upwards of 6,500 micrograms in less than half a cup.

Lycopene’s antioxidant activity has long been suggested to be more powerful than that of other carotenoids, such as beta-carotene. In one study, after controlling for other stroke risk factors, such as older age and diabetes, they found that men with the highest blood levels of lycopene were 55 percent less likely to have a stroke than those with the lowest.3

Watermelon also contains citrulline, which in your body is converted into L-arginine, which is a precursor to nitric oxide. Nitric oxide may help your vessels stay relaxed and open for blood flow, which is one reason why it may help lower blood pressure.

This blocks the activity of the pain and inflammation-causing enzyme cyclooxygenase – the same enzyme blocked by COX-2 inhibitors, which include most NSAID drugs like aspirin and ibuprofen.

While being very low in calories (about 46 calories in a cup) watermelon also contains an impressive variety of other important nutrients in which many Americans are lacking, including:

It’s not only watermelon that’s beneficial to consume in the summer – other melons, like cantaloupe, muskmelon, and honeydew, are also beneficial.

Cantaloupes, for instance, provide an excellent source of antioxidants, like vitamin C and vitamin A (in the form of carotenoids). They also contain important nutrients like potassium, folate, copper, B vitamins, vitamin K, magnesium, and fiber.

If you eat the seeds (yes, they’re edible), you’ll also get beneficial plant-based omega-3 fat in the form of alpha-linolenic acid. With relatively few calories (about 54 per cup) and low fructose (2.8 grams in one-eighth of a medium melon), this is one fruit you can feel good about eating.

Like watermelon, cucumbers are made up of mostly (95 percent) water, making them an ideal hydrating and cooling food. Cucumbers may also help to “cool” the inflammatory response in your body, according to raw-food advocate David Wolfe.

For instance, quercetin is an antioxidant that many believe prevents histamine release—making quercetin-rich foods “natural antihistamines.” Kaempferol, meanwhile, may help fight cancer and lower your risk of chronic diseases including heart disease.

Cucumbers also contain multiple B vitamins, including vitamin B1, vitamin B5, and vitamin B7 (biotin). B vitamins are known to help ease feelings of anxiety and buffer some of the damaging effects of stress.

There’s good reason to regularly include tomatoes, another cooling food, in your diet, as they are rich in flavonoids and other phytochemicals that have anti-carcinogenic and other healthy properties.

They’re also an excellent source of lutein, zeaxanthin, and vitamin C (which is most concentrated in the jelly-like substance that surrounds the seeds) as well as vitamins A, E and B-complex vitamins, potassium, manganese, and phosphorus. Other lesser-known phytonutrients found in tomatoes include:

Tomatoes are also a particularly concentrated source of lycopene. In addition to lowering your risk of stroke, lycopene from tomatoes (including unsweetened organic tomato sauce) has also been shown to be helpful in treating prostate cancer. If you eat tomatoes, choose organic varieties. One study found growing tomatoes according to organic standards results in dramatically elevated phenols content compared to tomatoes grown conventionally, using agricultural chemicals.

The organic tomatoes were found to contain 55 percent more vitamin C and 139 percent more total phenolic content at the stage of commercial maturity compared to the conventionally grown tomatoes.6

Rhubarb is high in fiber, which is why it’s long been used in TCM for soothing stomach ailments and relieving constipation. A one-cup serving of rhubarb provides high levels of vitamin K, vitamin C, vitamin A, and calcium, along with folate, riboflavin, niacin, B vitamins, and pantothenic acid. Rhubarb also provides important minerals, including manganese, iron, potassium, and phosphorus.

Due to its sour flavor, rhubarb is often found in recipes alongside sugar and other sweeteners. But a healthier (and far more cooling) way to consume it is by juicing raw right into your fresh vegetable juice. Remember, only the stalks can be eaten; rhubarb leaves are poisonous due to high levels of oxalic acid.